4th of July: Where to Watch Fireworks in Las Vegas

4th of July: Where to Watch Fireworks in Las Vegas

You might think that Vegas has enough lights in the sky, but the city celebrates the 4th of July every year with spectacular fireworks displays and celebrations, lighting every corner of the Las Vegas Valley. It’s also prime pool season in July so the 4th is a great time to hit up one of the city’s many pool clubs where the hottest DJs are sure to be spinning.  Here’s the list vegas.com put together:

July 4th is all about the fireworks and if you’re visiting Las Vegas for the holiday you’ll want to know where to see the displays and where to find other all-American entertainment.

Fireworks locations can vary from year to year but typically you’ll find them at several locations around town. 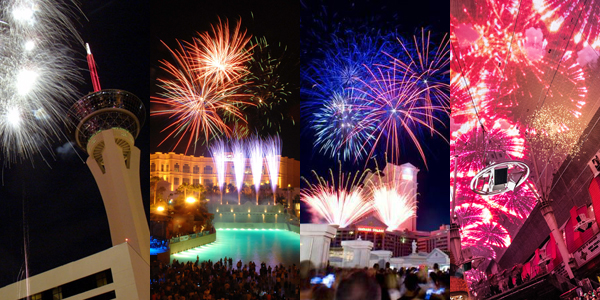 The Stratosphere Casino, Hotel & Tower
The hotel will be launching fireworks from their property on July 3 at 9 p.m. The fireworks display by Grucci will launch from various locations including the top of the tower.

Mandalay Bay
The sky above Mandalay Bay Beach will light up with fireworks accompanied by performances by 311 on July 2 – 3. Guests will be treated to 311’s hits, classics and rarities on July 2 & 3. Both shows will be followed by fireworks over the Las Vegas Strip.

Stations Casinos
The Stations Casinos properties, which are local casinos across the valley, will shoot off fireworks displays from their Green Valley Ranch Resort in Henderson and their Red Rock Resort in the northwest at 9 p.m. on July 4.

Henderson
The City of Henderson also holds an annual 4th of July celebration with live music, games, activities and a fireworks show at 9 p.m. in Mission Hills Park.

For the best view of fireworks in Las Vegas, visit one of the many spots around town that offer views overlooking the Strip and valley. Try Foundation Room at Mandalay Bay, Ghostbar at the Palms or Voodoo Rooftop Nightclub at the Rio. For restaurants with a view, there’s Alize at the Palms or the Eiffel Tower Restaurant at Paris.

Another great attraction that will offer plenty of views of the fireworks is the High Rollerobservation wheel at The LINQ. The High Roller will offer special 4th of July packages and will be lit up in red, white and blue for the holiday.

Fireworks at the Stratosphere take place at 9 p.m.

Radius Rooftop Pool & Wet Lounge  at the Stratosphere
Experience the fireworks up close at this party at the Stratosphere’s rooftop pool. There will be a DJ and other live entertainment plus an open bar (call drinks) from 6 p.m. – 7 p.m. Admission is $60. You must be 21 to attend this party.

Elation Pool  at the Stratosphere
This July 4th party starts at 5 p.m. and admission is $30. Enjoy a live performance by Yellow Brick Road and the fireworks extravaganza. 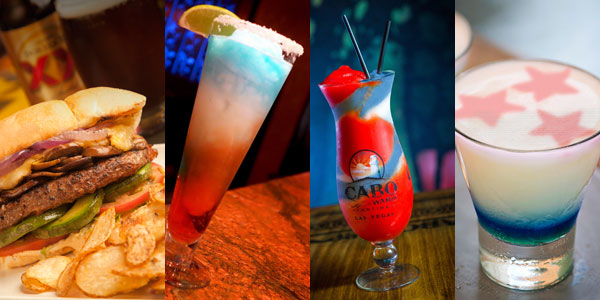 Cabo Wabo Cantina
Sammy Hagar’s rockin’ cantina will celebrate America by hosting an unforgettable patio party with drink specials, live music and fireworks on Monday, July 4. The patriotic patio party will be complete with the Fiesta Firework daiquiri, layered with strawberry daiquiri, piña colada and blue curacao, priced at $19. Guests can also enjoy views of the fireworks and live entertainment by Shawn Eifferman at 8 p.m.

Odd Fourth of July Facts. See How Many Hot Dogs Are Eaten.

The Top Reasons Workers Don’t Use Their Vacation Time!